Best Radeon RX 6800 GPU is an amazing graphics card that has lots of value to offer for their tier range. From high-resolution gaming to rendering. RX 6800 GPU might just be AMD’s most value-based … 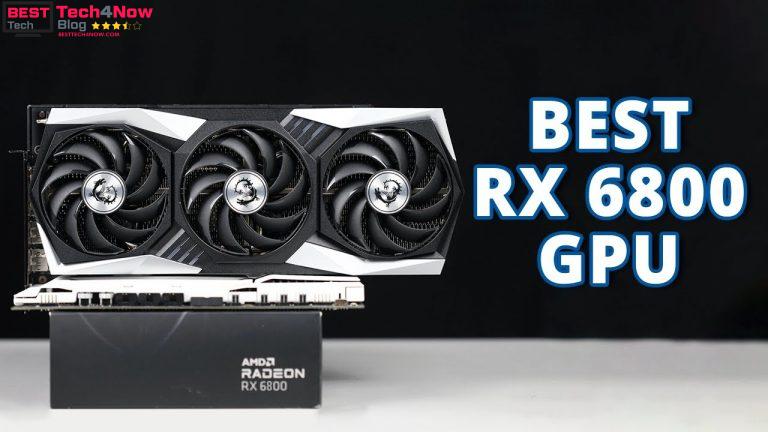 Best Radeon RX 6800 GPU is an amazing graphics card that has lots of value to offer for their tier range. From high-resolution gaming to rendering. RX 6800 GPU might just be AMD’s most value-based card currently available on the market.

however, there are plenty of aftermarket variants for this card, and choosing between them might get overwhelming. to help you with that we will be reviewing the top 5 best AMD RX 6800 GPUs in this article.

The four ports on the io panel include two HDMI 2.1, and two DisplayPort 1.4 which enables you to pair it up with multiple monitors if you prefer. overall the RX 6800 gaming oc is an amazing card that features a gigabyte signature design and will fit most standard pc cases perfectly.

Next up at number four, we have the TUF gaming oc by Asus. a robust variant of the RX 6800 GPU with greater cooling performance and durability. this all-aluminum shrouded GPU has an axial tech fan design where the longer fan blades are slimmed down for better airflow and cooling array.

Additionally, it has dual ball fan bearings that increase the durability of the fan to make it last longer compared to sleeve bearing designs. you’ll get about 2155 megahertz clock speed in gaming mode and can even crank it up to a maximum of 2190 megahertz in oc mode to squeeze up that extra bit of frames.

What’s more this GPU offers two bias options one for default mode and another for quieter fan operation for a tranquil gaming experience. to sum things up the tough gaming oc is a sturdy one with a better thermal solution increased durability and overall improved power efficiency.

At number three we have the MSI Gaming X Trio. a premium and performance series car from MSI that delivers what it promises. design-wise the graphics card is completely burnished with metallic and black finishing and features an aluminum front around the fans.

Talking about the fans it features MSI’s Torx fan 4.0 design that effectively maintains the airflow to keep the GPU cool even on intensive gaming usages. on the io panel, there’s a total of 4 display outputs that include 3 DisplayPort 1.4 and a single HDMI 2.1. the card is slightly bumped up from the reference card as it has a 1925 megahertz game clock speed and consumes about 250 watts of power to function.

Coming up at number two we have the sapphire nitro plus. a sleek variant with a reference RX 6800 card with greater thermal performance. this GPU features quite a similar design to the sapphire 5700 XT version with a black and gray finishing.

Though quite a few changes have been made as the fans have been redesigned with an xl design and we also have some subtle touch of RGB that looks quite sleek. on the back of the card, there’s a full-length silver backplate that looks cool and also includes some cutouts for access to additional airflow.

Performance-wise we’re looking at up to 1980 megahertz of the game and 2190 megahertz of boost clock speed that can deliver plenty of fps boost in-game. the io panel has four ports that include a single HDMI 2.1, and three DisplayPort 1.4 ports for seamlessly connecting it to your monitor. if you often overclock your gaming components you’ll find the sapphire nitro plus an ideal purchase.

Finally, number one we have the Asus rog Strix an outstanding RX 6800 GPU that can take on high-resolution gaming and render pretty well. similar to the tough gaming version this one is housing axial tech fan upgrades for optimized cooling solutions.

The PCB has undergone some improvements as well and so did the backplate with some performance-boosting charges. it doesn’t stop there as Asus has polished the surface of the heat spreader which provides better contact with the fan and heat sync for better thermal transfer.

The performance is also top-notch given its 120 megahertz of game clock speed and up to 2190 megahertz boost clock speed. the card will eat up 2.9 slots of the io end and we recommend having a big enough pc chassis to house this beast.

With its dual PWM fan connectors, you can directly attach the chassis fans for greater customization while increasing the intake or exhaust of the airflow that will aid you in intensive 3d tasks.

Overall the Asus rog Strix is one of the best variants of the RX 6800 currently available on the market with the extreme performance the most reliable cooling solution and an eyegasm design.

So that was all about the top 5 best AMD RX 6800 GPUs thanks for reading if you found this information helpful please like it and share it with your friends and comment below to let us know your thoughts.