GTX 1630 has officially launched from Nvidia. In this article, we will talk about the five aftermarket variants for the card that you should check out. PALIT GTX 1630 4GB DUAL OC ASUS GTX 1630 … 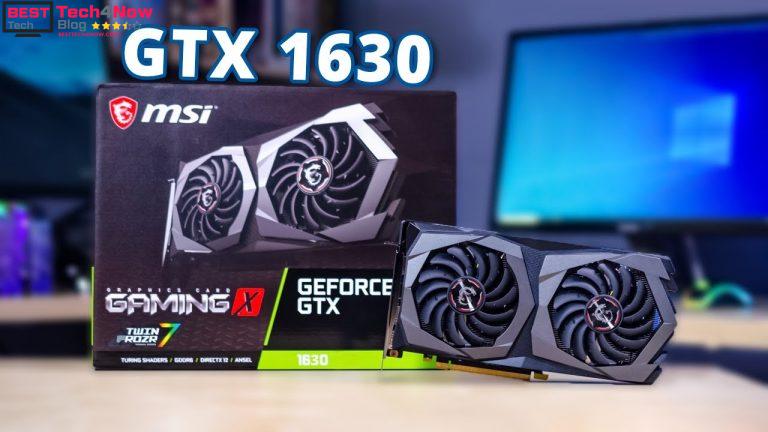 GTX 1630 has officially launched from Nvidia. In this article, we will talk about the five aftermarket variants for the card that you should check out.

Starting we have the colorful battle ax. while nothing special is going on with the card design it’s quite distinctive compared to the other variants. clockwise we have 1740 megahertz of base and 1850 megahertz of boost clock speed on this thing.

Having a 64-bit memory bandwidth this card only has 4 gigabytes of VRAM which although my struggle running recent game titles will get the job done of regular content consumption. for the display output, it has a total of three DVI dual link ports one DisplayPort 1.4, and a single HDMI 2.0 port. so we can say that the card is quite versatile in terms of connectivity.

Thankfully this card is PCI-E 3.0 compatible has a 6-pin power connector and draws only about 75 watts of power to function. compared to the other aftermarket variants the colorful battle ax is quite the decent one.

Gigabyte has also joined the 1630 bandwagon with its 1630 oc low profile card. as the name suggests it boasts a low profile shroud with a length of only about 167 millimeters which makes it perfect for low profile pc builds.

other than that it has a core clock speed of 1800 megahertz which is slightly better than the reference card’s 1785 megahertz of clock speed. even after being a low-profile card, it incorporates four display connections, including one dual-link DVI, two HDMI, and one DisplayPort 1.4 port. with specs and designs such as these, we expect to see the gigabyte oc low profile card be used in many pre-built pcs.

Next up we have the EVGA GeForce GTX 1630sc that boasts a sleek crowd moderate performance of the original card and a somewhat compact form factor. as mentioned earlier the shroud of the 1630 card does appear cool it has a gunmetal color grade to it which combined with the 120-millimeter fans gives this card a premium vibe.

Moving on to its interior features it shares the same specs as the base 1630 model with 512 Cuda and 1785 megahertz of boosted clock speed. other than that it has two DisplayPort 1.4 and one HDMI 2.0 board which is quite okay too for clean aesthetic pc builds the EVGA sc is worth considering.

We also have the tough gaming lc by Asus. a robust variant of the GTX 1630 GPU with greater cooling performance and durability. this all aluminum shouted GPU has an axial tech fan design where the longer fan blades are slimmed down for better airflow and cooling array.

You’ll get about 1850mhz clock speed in gaming mode and can even crank it up to a maximum of 1845mhz in overclock mode to squeeze up that extra bit of frames. as for DisplayPort you get one of each DVI-D dual link port one HDMI 2.0 and one DisplayPort 1.4 port. whatever interface your monitor is you’re less likely to face any issues. to sum things up the tough gaming oc is a sturdy one with a better thermal solution increased durability and improved power efficiency.

Finally, we have the PALIT dual oc. PALIT’s own take on the 1630 model that’s focused solely on performance this GPU shares plenty of design features with the EVGA model with an all-black crowd and a dual fan design. it’s only 170 millimeters in length making it ideal for compact builds just like most other 1630 variants.

But what’s unique about this card is it is a zero decibels feature that automatically switches up the fan under light to no workloads. also, you get one HDMI 2.0 and two DisplayPort 1.4 ports on this card that will let you work with multiple displays. to sum things up the polite dual oc is an ideal card for those who are into low-noise components that don’t compromise performance.

So that was all about the Gtx 1630 GPUs thanks for reading if you found this information to be helpful please give it a thumbs up share it with your friends and comment below to let us know your thoughts.