The wait is finally over as intel has finally launched its first desktop GPU the arc a380. This new challenger in the GP arena looks cool and has a decent set of specs for gaming … 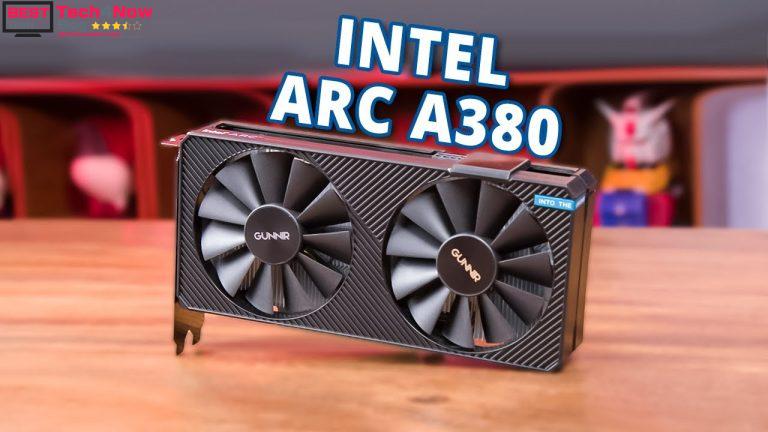 The wait is finally over as intel has finally launched its first desktop GPU the arc a380. This new challenger in the GP arena looks cool and has a decent set of specs for gaming but how good is it compared to the Nvidia and AMD offerings. in this video we will be reviewing intel arcs a380 GPU to figure out how much gaming potential this card has and whether you should get it.

This entry-level card from intel features a dual-fan design with a black and grey color-coded trout. Moreover, it also has some blue-accented pattern to the back plate that overall brings out the intel vibe well. The IO end holds a total of four display connections that include three DisplayPort 2.0 and one HDMI 2.1 port. with a physical dimension of 222 by 114 by 42 millimeters. this card can fit nicely in most mid to small tower pc cases.

Under the hood, the a380 is packing six gigabytes of gddr6 memory running at 2 gigahertz of base clock speed. it also has 8 ray tracing nxt cores and a 96-bit memory interface. with everything on board this card consumes about 75 watts of power. performance wise the arc a380 is slightly better at gaming compared to Nvidia 1650 and AMD’s RX 6400 graphics cards. according to wccf tech, this card can easily achieve above 60 fps in 1080p gaming, and in games such as apex legends and GTA 5, it can even cross the 100 fps mark.

The GPU gets even better in 3d mark times by testing where we get to see the a380 even surpassing AMD 6500 xt with a pretty decent score. arc a380 is currently available in china and is soon to be released globally by intel. with an approximate 150-dollar price it’s a bargain. even the 1650 and RX 6400 cost above 150 dollars making the a380 an ideal card for 1080p gaming.

Although we expected way more from intel the a380 is still a capable card. the performance is likely to get better as soon as intel optimizes the driver while the affordable price tag will appeal to gamers who want to build a budget intel rig.

So that was all about the intel arc a380 GPU thanks for reading if you found this information to be helpful please give it a thumbs up share it with your friends and comment below to let us know your thoughts.