Intel Arc GPUs were supposed to shake up the duopoly of Nvidia and AMD with unique features. However, the desktop GPUs have been further delayed, and there are only a few laptops with ARC GPUs. … 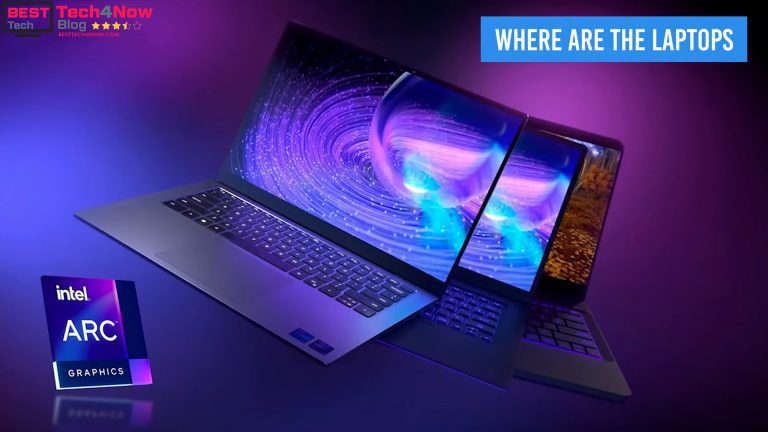 Intel Arc GPUs were supposed to shake up the duopoly of Nvidia and AMD with unique features. However, the desktop GPUs have been further delayed, and there are only a few laptops with ARC GPUs. So, how good are these laptops? we will discuss the news and benchmarks about the latest Intel ARC-based laptops.

After many teasers, intel arc GPUs have been released but only for laptops. even then it was first released in South Korea and later came to the US. so what’s up with the regional releases and how good are these discreet graphics cards.

Intel our graphics cards were supposed to shake up the GPU market. especially the dominance of Nvidia and AMD. however, things didn’t go as planned at least till now. although both desktops and laptops are scheduled to hit the shelves only half of it came to fruition. discrete GPUs for laptops were released with release dates for desktop cards being pushed back further.

However, even that release was sort of finicky while there was no point about regional releases in the announcement. the first laptop with archons was released in South Korea. intel support cleared their miscommunication through a tweet. the Samsung galaxy book 2 pros came equipped with a discrete GPU but the overall specs weren’t anything flattering.

This Samsung laptop came with a mere 1080p AMOLED display with a core i7 1260p on the lake processor as for the ram it came with 32GB ddr5 ram and a 1TB SSD for storage. the processor and the new discrete GPU paired nicely for the most part. however, what didn’t pay nicely was the price. this laptop will cost you six hundred and twenty thousand Korean won. which translates to two thousand one hundred and thirty-seven dollars even in the u.s launching the Asus zenbook flip and the hp specter came with the new arc alchemist graphics card each with a price tag of 1400 and 2000 dollars respectively.

These devices shipped with the new a370m GPU. so what’s the issue the problem is that a370m is an entry-level discrete GPU not only that intel’s original plan was to enter the budget market first with laptops running from just 8.99. so intel missed that mark beside the desktop GPU release date.

For the price of the zenbook flip or the specter, you can get a great gaming laptop with RTX 3070. so it’s clear that the release plan for the arc cards wasn’t too smooth. if they want to make up for these finicky releases they need to come out with the portable laptops and quickly. more on the performances of the graphics cards later on.

Now that these cards are no longer region-locked why are there so few there are few explanations behind this with some speculations? firstly the problem might not be with intel but with some system integrators. you see these recent laptops they’re based on the alder lake processor. which came out last year. on top of that, the architecture for these systems goes best with Nvidia and AMD.

So you can’t just throw interlock in the mix since the architectures don’t mix well. that also explains the regional release and why Samsung was the first to release a laptop with the latest GPU. some also speculate that intel is having trouble rolling out drivers and there’s some ground to it. for example, they failed to release day zero drivers for Elden ring and still, no optimization has been made.

Furthermore, 3060 beats ark with a score of 8201 points on the shadow of the tomb raider you’re getting 59 fps with the arc card, and with iris xc, you’d get only 21 fps. again the new discrete graphics card wins with 3050 you’ll get 50 fps and with 3060 the fps rockets up to 98. a370m as an entry-level GPU performs well against other similar cards.

But when pitted against a mid-tier card the scenario changes and team green takes the cake. so what does it boil down to well intel arc a370m is a great entry-level card for the most part. competing against Nvidia 3050 pretty nicely. it comes with unique features especially hardware encoding to run 8k without becoming a fire hazard.

But even with all these features intel cards are failing to attract customers due to the price of the devices. for 2000 and more dollars people can grab a great laptop with Nvidia 3070 that will blow a370m out of the water. we will be back again with more updates on the intel arc laptops as soon as they hit the shelves.

So that was all about the intel arc laptops and their initial performance thanks for reading if you found this information helpful please like it and share it with your friends and comment below to let us know your thoughts.

5 Coolest Gaming Techs Gadgets That Will Amaze You