What Is Processor Speed?

CPUs are complex pieces of hardware and as such, they feature several different specs. all of these specs contribute to their overall performance. so it’s a bit tricky when one of the specs is often … 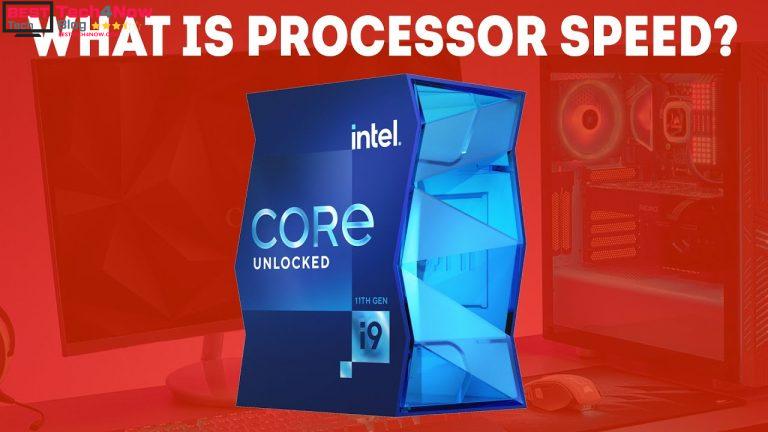 CPUs are complex pieces of hardware and as such, they feature several different specs. all of these specs contribute to their overall performance. so it’s a bit tricky when one of the specs is often referred to as processor speed or CPU speed. this specification is defined as clock speed and it certainly contributes to the CPU’s overall performance.

It’s not the only spec that matters. depending on what you use your pc for it could be the least important CPU spec. in this article, we want to dispel some misconceptions that are generally associated with processor speeds and explain what the spec is all about. but before we can do that we need to make sure that we’re all on the same page by going through a brief refresher course on CPUs.

What Is A CPU?

The CPU or central processing unit is often referred to as the brain of the computer and for good reason. this piece of hardware is single-handedly responsible for reading interpreting and executing instructions from application and input peripherals.

Through the motherboard, all other pieces of hardware are connected to the motherboard and unlike some other components. the CPU is essential you can have a pc without a dedicated graphics card. but a pc without a CPU is simply inconceivable also no other piece of hardware can do anything that the CPU doesn’t instruct it to do. in that sense, the CPU is like the general manager of a computer.

We mentioned that the clock speed is but one CPU spec. another hugely important specification is the core count. a CPU can feature one or more cores although nowadays single-core CPUs are a thing of the past.

Whereas single-core CPUs could only ever do one thing at a time access to multiple cores allows CPUs to handle multiple tasks at once. at present even budget gaming CPUs feature at least four cores. we say this because the ability to handle more tasks at once can have a massive impact on a CPU’s overall performance.

Sometimes certain CPU-intensive tasks like video editing can even utilize multiple cores to work on the same task. this is why it’s important to understand that clock speed the spec often called processor speed isn’t all you should look at when calculating how speedy a processor will be. so let’s finally take a closer look at clock speeds.

What Is Processor Speed?

Well no at least not necessarily which is why this specification is so tricky. the thing is clock speed does not measure how fast the CPU can communicate with other components in the system. yes, a CPU with a higher clock speed can execute instructions faster but this isn’t an absolute measure of performance and it’s not like clock speeds are the only other spec you need to take into account.

They are very important but arguably the most important factor that determines the speed of a CPU is the architecture. for example, a 2.6 gigahertz CPU can easily outperform a 3.1 gigahertz processor if it has better architecture.

This makes it more efficient and allows it to execute more instructions per cycle because 3.1 billion cycles per second isn’t the same as 3.1 billion instructions per second and this is why looking at them on paper specs when comparing CPUs is not something we advise. the only scenario in which this can tell you the whole picture is if two CPUs feature the same architecture.

Belong to the same brand and generation and have the same number of clock speeds. only then can you point to the CPU with a higher clock speed and say with certainty that one must be faster than the other. for a more accurate portrayal of a CPU’s performance especially relative to another CPU, it’s best to look at actual benchmarks.

How Important Is Processor Speed?

This leads us to the last question which is how important is processor speed. to answer this question it’s important to distinguish that clock speeds aren’t equally important for all types of uses. for example, a workstation that handles video editing and other CPU-intensive tasks will get a lot more mileage out of a higher clock speed than say a gaming CPU.

For gaming, you will generally see a bump in performance as you increase the clock speed but this will rarely be more than a bump and we can say this with certainty because there is a way to raise only the clock speed by overclocking the CPU.

Overclocking means raising the ceiling on the clock speed to where it’s higher than what the manufacturer originally intended not. all CPUs can be overclocked and it’s not a practice meant for all users anyway as it voids the warranty.

We know what the effects of raising the clock speed without touching any other metrics are. for gaming, you get a slight performance bump likely a single-digit fps increase. this is why we mostly recommend overclocking as a means of extending the lifetime of an outdated CPU that’s no longer covered by warranty anyway.

So there you have it the actual usefulness of a specification that is wrongly associated with the overall effectiveness of a CPU. processor speed isn’t a negligible spec by any means but for gamers chasing a higher clock speed can yield diminishing returns.