Which is the Best 4K Monitor? Sony Inzone M9 VS Odyssey Neo G8 –

While 1080P and 1440p are the most sought resolution for gaming 4K is gradually getting more popular compared to the other two. To add more to it Brands such as Sony and Samsung are coming … 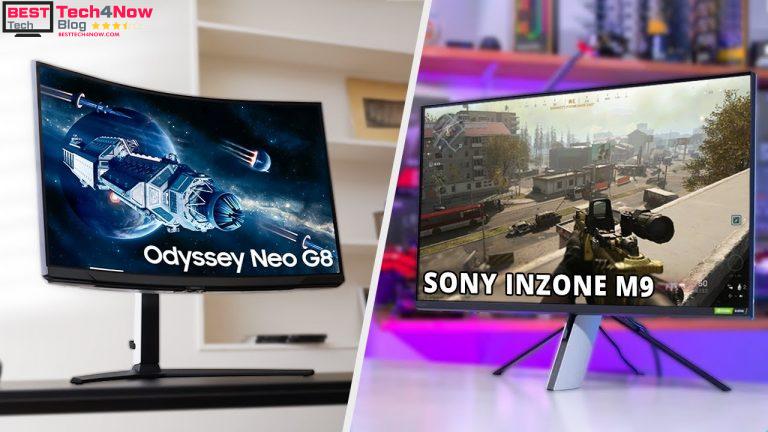 While 1080P and 1440p are the most sought resolution for gaming 4K is gradually getting more popular compared to the other two. To add more to it Brands such as Sony and Samsung are coming up with Advanced 4K monitors such as the Inzone M9 and odyssey Neo G8. In this article, we compared these monitors head-on to help you decide Which is the Best 4K Monitor.

Naturally, the Indzone M9 has a BMW color scheme that closely resembles a PlayStation 5 console. We can also see an LED light bar on the back that gives a gaming Vibe. what’s unique about this monitor is its base which looks like a miniature PS5 console but it does have its perk you can properly utilize your desk space and the monitor will support you through most of your play style.

It is height adjustable and can also be tilted for comfort as for connectivity, you get two HDMI 2.1 a single display port, and a USB-C port.

Neo G8 on the other hand has a 1000r curvature and Samsung’s Infamous Infinity core lighting design. the v-shaped base feels super sturdy while the stand offers a wide range of adjustability including tilt swivel and height adjustment. as for both you get two HDMI 2.1 one DisplayPort 1.4 and 2 USB 3.2. sadly there is no USBC connectivity on this monitor.

While both of these monitors are 4K there are some underlying differences the 27-inch End Zone M9 has a needed resolution of 3840x2160p that runs at a 144hz refresh rate and a response time of only one millisecond. it’s g-sync compatible and also supports variable refresh rates. surprisingly Sony has integrated full area backlighting on this monitor that’s often seen in 4k TVs. so the color quality of this 4k monitor outrivals most gaming screens on the market.

As for the 32-inch Neo G8, it boasts a Quantum mini LED screen with 200 nits of brightness and HDR 2000 compatibility and combined with this 240Hz refresh rate through freesync premium Pro. this monitor holds an upper hand over the Inzone M9.

So which one of these is the best high-end 4k monitor the answer to this question can be relative. priced at around 9.99 The End Zone M9 is quite an impressive gaming monitor from Sony. it’s suitable for both PC and console Gamers and has tons of value to offer for the price you pay. on the other hand, Neo G8 has both top-of-the-line specs with a bigger curved screen at a hefty price tag of 1500 dollars. for the price, you get a maximum resolution of 4K and enhanced HDR performance even from the Inzone M9. if you can care less about the price Neo G8 is your best bet otherwise the ends on M9 will suffice.

So that was all about the Sony in zone M9 versus Odyssey Neo G8 debate thanks for watching if you found this video helpful please give it a thumbs up share it with your friends and comment below to let us know your thoughts.

8 Next Level Gadgets You Should Know About